The 2016 Seminole Hard Rock Poker Open just began, giving players another option to get their fill of tournaments and events, as the World Series of Poker has ended until the final table it played in November. This enormous tournament series will take place from July 28 – August 16 and is being hosted by the world renowned Seminole Hard Rock Casino in Florida. It will offer 83 events during the few weeks it will be in the spotlight, with several big prize events that will be bringing in the top players from around the globe.

With a total of 83 different events during the series, there are more than a few that will have substantial payouts and prizes for the winners. They are already well into Event 1 Day 1C: Deep Stack No Limit Hold’em, which has a guaranteed prize pool of $500,000 is a great way to start out the series. This particular event will run for several days, and will allow players to buy back in; a low cost of $360 buy-in with the promise of a big cash prize. There are other highly anticipated events including:

There are countless other events with prize pools ranging from $50,000 up to $250,000 that players can also take part of, especially thanks to their low buy-ins. At the end of the tournaments series, the Seminole Hard Rock is also hosting The Big 4 tournament that will also be televised on CBS Sports Network, as well as live streamed online through PokerNight.com.

With poker players wanting to get more out of the summer, this tournament is perfect for them to play at, especially if they wanted to continue their success from the WSOP. Early on in the Event 1 we see Sheddy Siddiqui making his presence known as he stands out among the remaining 250 players of Day 1C. A great way for players to get a few more Card Player of the Year points to bump up their rankings and get some cash along the way. 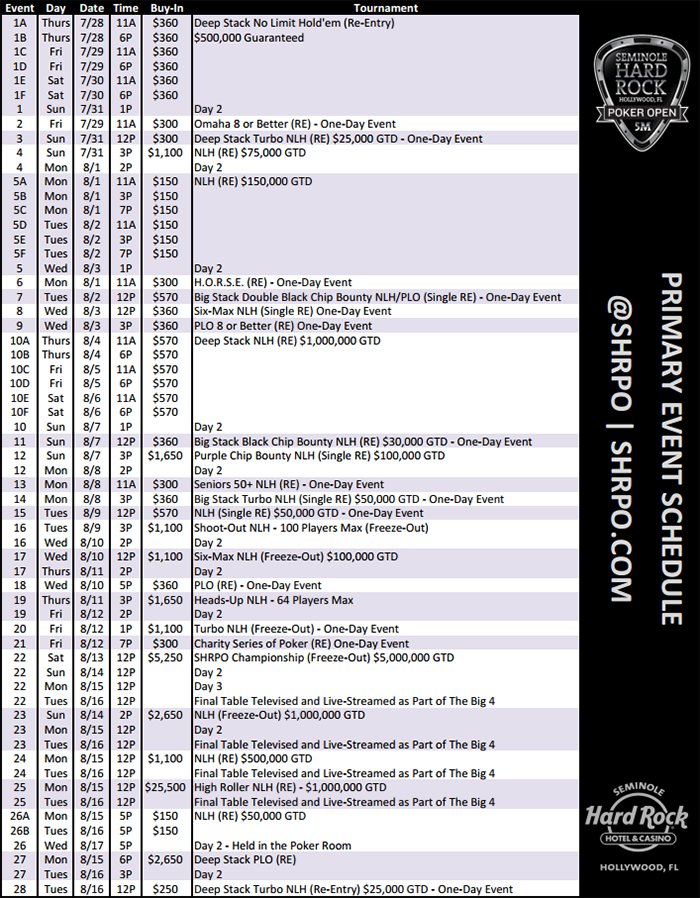