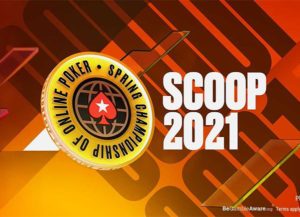 Spring Championship of Online Poker (SCOOP), and the 2021 online real money poker tournament started recently, taking place on a popular platform called PokerStars. The first day started with a total of 18 events, and one of the participants was the legendary German player Fedor Holz, who uses the online moniker “CrownUpGuy.” The two events that gained many people’s attention were the $10,300 NLHE (8-Max, High Roller) and a $215 NLHE Progressive KO, Sunday Million SE.

Fedor Holz was very close to winning a title in the SCOOP-07-H, a $2,100 NLHE Event that used the turbo and progressive knockout structure. Ultimately, he ended up in second place, winning a total of $42,538 for his effort. He faced Maksym Mamonov in the heads-up, and Mamonov eventually won the event for $88,728. Other people who managed to win a title during the opening night were Ilari Tahkokallio and “Diegops_AKs.”

As previously stated, one of the most exciting events was SCOOP-06-H: $10,300 NLHE High Roller, so let’s see how the action unfolded in that one.

The final winner of the event was a Hungarian player Laszlo Bujtas, who goes by the nickname “omaha4rollz.” He managed to win a total of $254,256 as his final prize. Once again, the player who managed to make it to the heads-up part of the tournament was Fedor Holz, but he failed to reach the main prize, having to settle for the consolation prize of $196,995. In other words, he was one step away from the title in two events.

On the other hand, Bujtas is also an experienced poker player, and he already recorded SCOOP titles in the past. What’s different this time is that he managed to win his first no-limit hold’em SCOOP event, as his previous wins were in NNL Draw and PLO Rebuy events; both of them won in 2019.

Bujtas was the chip leader at the start of the final table action, but he didn’t manage to keep his lead all the way through. Instead, he had to bounce back a couple of times and assume his leadership back.

The final table started with Finland’s Samuel “€urop€an” Vousden hitting the rail as a ninth-placed player for $33,766. He was followed by Dominik Nitsche, another great online poker player, who had to settle for $42,615.

The seventh-place was reserved for Russia’s legendary Artur “marathur1” Martirosian, who won $55,002, and Jon “apestyles” Van Fleet waved goodbye to the rest of the final table after that for $70,989.

Laurynas “LaurisL91” Levinskas from Lithuania managed to win $91,614 as the fifth-placed player, and Simon Mattsson left soon after that, with a total of $118,256 in his pocket. The last player to hit the rail before the heads-up play was Michael Addamo, who won $152,630. This paved the way for Holz and Bujtas to face head-to-head, and Bujtas eventually celebrated with a total of $254,256 in winnings.