888poker, one of the world leaders in online poker, has just recently signed a partnership deal with the Russian Poker Tour (RPT) to become one of their official sponsors. They have previously signed deals with others like Aspers London to sponsor the 888Local series during their second season. They have also announced that they are coming back as a general partner for the World Series of Poker this year. This popular online room is growing, and fast, and it is taking the world by surprise.

The RPT has been going strong since it was established in 2009, where it hosts multiple tournaments across Eastern Europe, as they have been unable to in their home country due to the current legislation. They have awarded players from all over Europe and Russia with more than $30 million in prize cash. Poker isn’t their only attraction, as they have a reputation for hosting special entertainment for their guests.

What the Partnership Brings to the Table

With the partnership between the RPT and 888poker, it will bring in many different benefits for both parties. The online poker giant will use their rooms to host satellites to get qualifying players for the different RPT events. Players can already participate in the satellites that will get them a seat at the first of RPT’s events taking place at the “Cotton”, Mink’s amazing concert hall, from April 9-18.

Some of the events players can expect are:

“Where else can I spend my time in such a big company of friends and like-minded people?”

There are plenty of other players that will be going to Minsk to try their luck at the many events being hosted by the Russian Poker Tour. The entire Minsk schedule, as seen below, shows you just how many events there will be, and how much money the winners will get. 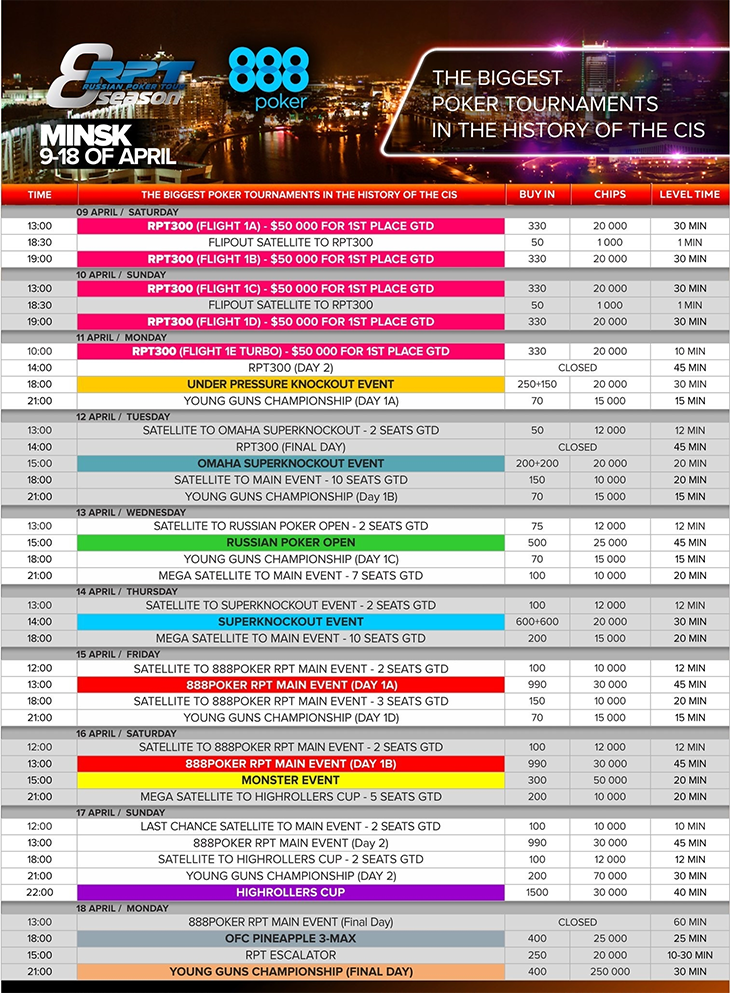