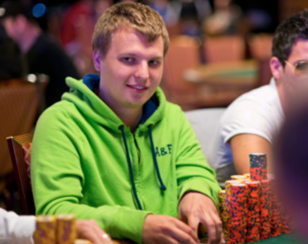 Aleksejs Ponakovs made a significant win on Sunday by participating in a World Series of Poker event that was available as part of the WSOP Online festival on WSOP.com. The poker player from Estonia managed to win $431,491 by topping Event #8: $7,777 No-Limit Hold’em Lucyk 7’s. That was the first gold bracelet for the talented Estonian player.

“APonakov” didn’t have an easy task in front of him, as the online high roller real money poker event attracted as many as 230 entrants. A total of 183 players were unique, in addition to 47 rebuys. Ponakovs had to face plenty of top-of-the-class players, which he outplayed, including Dario Sammartino, the player who managed to end in second place in the 2019 WSOP Main Event. Sammartino busted in 30th place and managed to win $11,877 for his effort.

Many other players were part of this online event. For example, Adrian Mateos, one of the best high rollers in the world, ended his run as the 25th placed player and won $13,574. Moreover, Darren Elias followed him shortly, busting in the 23rd place and the same amount as Adrian Mateos. Jason Koon was another familiar name to the poker world.

The talented player, who won his first WSOP bracelet this year, was eliminated in 20th place and won the same amount as Mateos and Elias. We shouldn’t forget about the talented Ali Imsirovic, who also recorded a deep run and busted in 17th place, winning a total of $15,949.

Aleksejs Ponakovs didn’t have an easy job before him even when he reached the final table, as many other professional poker players were as eager to compete for the gold bracelet.

The first player to hit the rail was Arian Stolt from the US, who managed to win $29,692 as the ninth-placed player. He was followed by Christopher Robin Frank, an Australian who snatched a total of $38,176.

The next one in line to leave the game was UK’s Sergio Aido Espina, who managed to win $51,071 for his effort.

Perhaps the most famous name in the final table was Rainer Kempe, and the legendary German poker player had to hit the rail in the sixth place, winning $68,207.

The fifth place was reserved by Dylan Linde from the US, who won $92,131, and he was followed by a compatriot of his William Romaine, who received $128,780.

Ponakovs met with Jaroslaw Jaskiewicz in the heads-up, a player who lives in Canada. However, Jaskiewicz was no match for Ponakovs and had to settle for the consolation prize of $267,232, with the first gold bracelet slipping his hands for now.

Ponakovs showed how talented a player he is, and we can probably expect to see more of him in the future WSOP Online events.