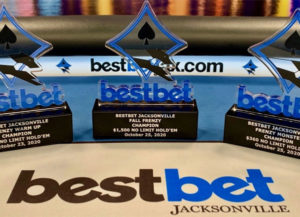 There still aren’t many live poker tournaments out there, so every single one that takes place is very exciting. One of the latest live festivals that wrapped up was part of bestbet Jacksonville, which hosted the Fall Frenzy II tournament.

The series reached its peak on Sunday when the final players of the 2020 bestbet Fall Frenzy $1,500 Main Event started competing for the final prize.

The final hand took place between Benjamin Diebold and Dhimitri Lleshi. Diebold managed to outperform his opponent and ended up winning the tournament and the prize of $63,182.

Before achieving that victory, Diebold had managed to earn a total of $315,908 in lifetime earnings from poker tournaments. His career-best score is $75,655, and he won it after taking down the 2018 CardPlayer Poker Tour bestbet Jacksonville $1,100 Main Event.

The year 2018 was definitely Diebold’s year, as he managed to end up a runner-up in WSOP Circuit Harrah’s Cherokee High Roller, where he won a total of $63,721. In other words, the price he won today is his third biggest score.

Even though his opponent Lleshi failed to win the event, he still managed to claim a title after topping the 254-entry field of the $240 Warm-Up NLH, where he managed to win a total of $11,674.

Finally, Raminder Singh, who ended up in 11th place in the Main Event, also had a reason to celebrate, as he took down the $360 Monster Stack and earned $10,457 for his effort.

The final table of the Main Event started with nine players, and the first one to hit the rail was Brooks Jampole from Tallahassee, Florida, who earned a total of $6,319.

After that, it was time for Michael Cox from Sumter, South Carolina to leave the game, winning $7,292.

The seventh-place was reserved for Jacksonville’s Edward Mroczkowski, who earned $8,292 for his effort. His neighbor Roderick Moore hit the rail after that and won $9,731.

The fifth place was claimed by Stephen Strout from St. Augustine, FL, who won a total of $11,743. Another player from the same location, Guy Caudill, ended his run after that, with $15,206 in his pocket.

The last player to hit the rail before the heads-up was Patrick Pigford from Neptune Beach, Florida. Pigford won a total of $24,998, leaving Leshi and Diebold to duel for the final prize. Diebold won against Leshi and earned his third-biggest prize.

Jacksonville will continue with weekly live tournaments throughout December, meaning players will have plenty of opportunities to hang out in a real poker room if they go to Florida.