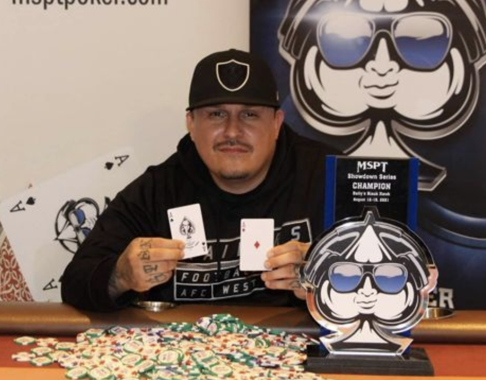 Another successful stop for the Mid-States Poker Tour (MSPT) took place after the Bally’s Black Hawk $1,100 Main Event wrapped up. The event attracted a total of 651 entries and had three starting flights, generating the final prize pool of $631,470. A total of 83 players returned on Day 2 to compete for the biggest share of the pool, and the player who received the biggest slice was Bobby Garcia.

However, he wasn’t the only one, as there was a three-way deal, and he was joined by Tyler Potts and Cory Smith. All three of them received $89,038 each in this real money poker tournament. Garcia had just one big blind more than Tyler Potts, who ended up in the second place. In other words, just one blind decided who’ll take home the accompanying trophy.

Bobby Garcia started the tournament with lifetime poker earnings of $99,573, and most of them were earned in Black Hawk, Colorado. However, he almost managed to double that amount by topping the Black Hawk Main Event.

Garcia started Day 2 with 143,000 in chips, which was below the average at that point. Nevertheless, he quickly managed to get to the seven-figure chip count, becoming one of the leaders. Needless to say, he managed to stay on top (or close to the top) for the rest of the tournament and eventually won it.

Tyler Potts and Cory Smith both had above-average chip count throughout Da 2 and were also close to the top the entire time. This three-way deal was a big deal for Potts, who landed his largest poker prize. This was also the second-largest prize for Cory Smith, with the biggest cash being after ending a runner-up at the World Series of Poker Circuit Tunica in 2017.

At the start of Day 2, 83 players returned to the felt, but 11 of them left the game empty-handed, as only the top 72 players made it to the money list. During the first 45 minutes, ten players were already out of the game when Alex Wheeler finally burst the bubble. He was eliminated by David Blankenship and Potts, as both players had a straight and chopped the pot.

Some of the players who made it to the money list but failed to reach the final table are Kane Lai, Krzysztof Stybaniewicz, Keni Eyster, Eli Loewenthal, Max Young, and John Sun.

The first player to hit the rail in the final table was Yohannes Ambaye for $11,366, and he was followed by Adam Wilbur for $15,155. The seventh-place was reserved for Michael Jagroo, who managed to win $18,944, and the next player to go out was Jon Glendinning for $24,672.

Dapo Ajayi hit the rain in fifth and Norm Tanner in the fourth position, winning $32,836 and $43,571 respectively. This left the remaining three players — Cory Smith, Tyler Potts, and Bobby Garcia to split the remaining money.