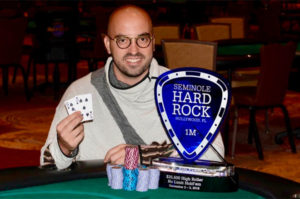 Bryn Kenney is at the peak of his career. He managed to take down yet another high roller event. Confirming his position as the poker player leading on the all-time money list.

His final opponent was Brock Wilson, with whom Kenney struck a heads-up deal and shared the final prize.

Poker Tournament Had A Great Turnout

Kenney liked how things turned out. He stated that there were enough poker professionals in Florida who would come every time there’s a high roller event.

This event was also pretty popular for a high roller competition and attracted a total of 45 players, with the majority of them being professional poker players famous around the globe.

Some of the players that also made it to the final table were Anthony Zinno and Jason Mercier.

After Lazaro Hernandez hit the rail as the seventh-place player and earned a total of $44,460, Brock Wilson emerged as the chip leader. Jason Mercier not being that far behind him.

Kenney saw a couple of opportunities to stay in the game, only to see Andjelko Andrejevic being eliminated in sixth place and earning $61,135.

Wilson decided that it was time to get back to the top when it comes to the number of chips, and did so after he eliminated Anthony Zinno for $77,805.

Both Wilson and Zinno managed to flop a flush. However, Wilson was luckier as he had the nut flush, ending Zinno’s time in the event.

Taking Our Mercier With Kings

The next player to hit the rail was Mercier, who had ace-queen as his hole cards only to stumble into Kenney’s kings. Mercier ended the game taking $111,150.

Kenney Sealing The Deal For Robinson

Jerry Robinson was third, and he also felt Kenney’s wrath. During his last hand, Robinson was down to only 20 BBs and went all-in with king-10.

He managed to river a straight, but that was not enough as Kenney had a flush and prepared the ground for heads-up play.

At the start of the heads-up part of the tournament, Kenney had a massive lead over Wilson. However, Wilson proved to be a tough nut to crack and soon managed to double up. After that, the two players counted their chips and decided that it was time to make a deal:

Kenney was eager to answer the questions of reporters, saying that he had a “fun time” and that he had been in New York for Thanksgiving, only to fly to Florida on the morning of the High Roller event.

He stated that a two-day event with 45 players in a beautiful city was a great experience and that the weather was great as well, which means that he was going to the beach after the victory.