The partypoker MILLIONS North America is in full swing, with the $25,000 Super High Roller being the latest event to finish. The Playground Poker Club in Montreal has hosted the series with a total of CAD $15 million in prize money up for grabs. The Super High Roller event had a $25k buy-in and 47 players took part. The guarantee of CAD $1 million was surpassed. It was Christopher Kruk who earned the first-place finish and won $375,000 CAD, after defeating Anthony Zinno in heads-up play.

When Day 2 began, only 15 players would return. It would take some time, but eventually the tournament was whittled down the final seven, with each set to earn a nice payday. In the end, Zinno and Kruk would find themselves the final two remaining and would face-off against each other in heads-up play. 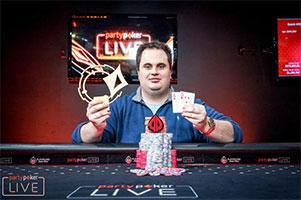 Heads-up would move quickly as the blind levels were reduced to 20 minutes. It wouldn’t be long before the final hand would go down. Zinno would open from the button with his pocket sevens and Kruk would go all-in with Ace-5 suited. Zinno would call, putting his tournament life at risk.

The flop proved no help for either player, but the turn and river would create a double pair on the board, making Zinno’s pair no good and Kruk’s Ace-5 the winning cards. Kruk would claim the victory and earn $375,000 for his efforts.

Partypoker now travels to Sochi Casino to host the Sochi Poker Festival. Player will able to take part in a mix of tournament events, including a massive Main Event that is already underway!