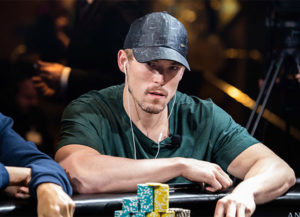 David Peters is one of the most popular poker players in the US (and around the globe), and he managed to score another major victory, winning a total of $75,000.

This price was just a small contribution to his enormous amount of poker earnings. So far, Peters has managed to amass a total of $6.3 million in online poker cashes and $33.7 million from live poker tournaments.

The tournament ended on January 17th, and it was a $2,600 High Roller Big Game hosted at partypoker. A total of 137 players registered for the event, but only 23 top performers had an opportunity to receive a share of the prize pool.

The money bubble was popped by Sam Greenwood, which means that players such as Kristen Bicknell or Patrick Leonard were in the money. Other popular players who also had an opportunity to receive a share were Parker Talbot, Thomas Muehloecker, Pascal Lefrancois, and Jon Van Fleet.

The first one to hit the rail was Swedish poker pro, Niklas Astedt, who managed to win a total of $8,591. He was followed by Kristoffer Edberg, who also represented Sweden in the tournament and who won $10,428 as the eight-placed player.

The seventh position belonged to Stephen Chidwick, the legendary UK player who represented Mexico this time. He managed to win a total of $12,326. Chidwick was followed by Enrico Camosci, who managed to earn $14,641 after leaving the game in sixth place.

The next one in line was Mikiza Badziakouski, a legendary player from Belarus who represented Slovenia in this online poker tournament. Mikita managed to snatch a total of $18,379.

Fourth place was reserved for another poker professional, Matthias Eibbinger from Austria, who ended the tournament with $24,882 in his pocket.

The last player to hit the rail before the heads-up was Juan Pardo Dominguez, who earned a total of $35,325.

Peters’ final opponent was another great poker player from the North American continent — Mike Watson. The two of them made a heads-up deal, where Peters had an opportunity to receive a bigger part of the prize, whereas Watson had to settle for the consolation prize of $54,958.

Conor Drinan managed to top the $2,625 buy-in High Rollers Blade Closer at GGPoker, where he won a total of $39,356 after winning against “Pluto The Doggo” in the heads-up.

Georgios Manousos managed to take down the Sunday High Rollers Main Event, which required a $1,050 buy-in, and won a total of $97,353 after facing Adam Hendrix in the heads-up.

Day Kotoviezy from Brazil managed to emerge on top of a $530 buy-in Big Game, which attracted 452 entrants. She won against Paresh Doshi and won a total of $39,279.