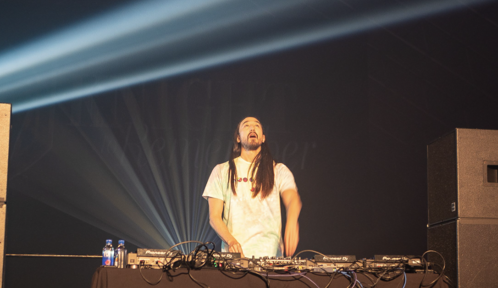 Superstar DJ Steve Aoki made his first appearance as a partner of the World Poker Tour (WPT) at the Seminole Hard Rock Poker Showdown in Hollywood, FL.

The famous producer and musician signed a deal with WPT last December as a poker ambassador and was excited to get back into action at the table.

Aoki has been involved in the game of real money poker for many years and has friends among the professional poker player ranks, including 16-time WSOP bracelet winner Phil Hellmuth.

He likes to compete against the pros regularly and has played in episodes of Poker After Dark and the 2021 WPT Heads-Up Poker Championship.

Aoki is from Newport Beach, CA, but lives in Las Vegas and regularly performs at some of the city’s top nightclubs.

The WPT arranged a meet-and-greet before the start of the tournament for any fans that wished to meet the two-time Grammy-nominated artist and have a chance to take home some of his signed items from Dim Mak.

In a press statement released by WPT, he said, “I am super excited to get back to playing some cards with the World Poker Tour. Seminole Hard Rock Poker Showdown, here I come!” The event commenced on April 8 and wraps up today.

After interacting with fans at the meet-and-greet, Aoki moved on to the tables to play some poker, and it wasn’t long before he was right in the middle of the action. In his very first hand of the tournament, he was dealt 5S, 3H.

Then, after a flop of AS, 4S, and 2H, he was in prime position to double-up, holding a straight, and moved in his stack of $19,500 against Carlos Rodriguez, who was holding 6H, 5H, giving him middle pair and a backdoor flush draw.

The turn card was the KH, but the river was not the card Aoki was hoping to see as the 10H hit the board and gave Rodriguez the heart flush to knock Aoki out of the tournament and take the pot.

End of the Line

Besides winning the pot, Rodriguez won the $500 bounty for taking down Aoki and was also given the custom Dim Mak jacket the superstar was wearing when he sat down at the table. Rodriguez continued to wear the jacket as he resumed play in the tournament.

From the original entry of 2,010 players, 16 of them will return for Day 4 of the WPT Poker Showdown Championship and hope to make it to the final table.

Mark Davis is the current chip leader, with Darren Elias not far behind. Elias is a four-time champ in the WPT and is just ahead of James Calderaro, who came in third.

The remaining players are very talented and are all guaranteed at least $51,000 in winnings no matter where they finish at the final two tables.