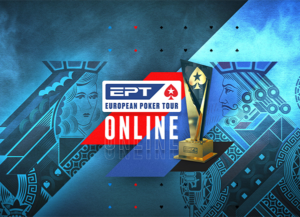 The COVID-19 pandemic caused many live poker tournaments to be postponed or canceled at first. However, their organizers found an even better way to enable players to take part — on the web with online poker.

Recently, the first-ever version of the digital European Poker Tour (EPT) started. The 2020 EPT will host a total of 20 events and distributed approximately $20 million in guarantees. The buy-in prizes will range from a couple of dollars up to $25,000 per event.

The festival started on Nov. 8 and will last until Nov. 18. It will be available via PokerStars.

One event already wrapped up, meaning one player managed to win a title — David Laka. Coming from Spain, “MonkeyBausss” managed to beat the field of 131 players and win the top prize of $143,567.

The event lasted approximately six hours before Laka managed to cement his victory in Event #3: $5,200 NLHE. He claimed the trophy after a heads-up duel with Pascal Lefrancois. In doing so, Laka made history as the first-ever EPT Online Champion.

The event attracted a total of 87 unique players, in addition to 44 re-entries, creating the final prize pool of $655,000.

Laka is no stranger to big poker tournaments. The 24-year-old Georgian already managed to amass more than $1,600,000 in live cash winnings. One of his most recent results took place in 2018 when he participated in EPT in Prague.

He also participated in numerous online events, and his biggest online cash came after coming in second-place in WCOOP-08-H: $1,050 NLHE (Progressive Knockout).

Laka’s final opponent, Pascal Lefrancois, was the only other player to earn a six-figure score in the event. Lefrancois has been playing poker actively for a while and managed to amass more than $5 million in live cashes. His most recent one at EPT Online is one of his top-three online cashes.

The final table hosted some of the well-respected players in the poker world. Let’s see how the action unfolded in the last part of the event.

The first player to hit the rail in seventh place was Chris “ImDaNuts” Oliver from the United States, who won a total of $31,057. The only other remaining American was Jon Van Fleet, who uses the online moniker “apestyles.” Van Fleet was the very next player to go, earning $40,085 for his effort.

Finishing in fifth place was a Croatian player nicknamed “zufo16.” The person hiding behind the nickname was probably Ivan Zufic, the online poker prodigy known for winning the WSOP online 2020 Mini Main Event. He won a total of $51,736 in this EPT Online event.

The fourth-place finisher was Vyacheslav Buldygin, a player from Russia who managed to earn a total of $66,774. His compatriot, Artem “veeea” Vezhenkov hit the rail after that and was the last one to say goodbye before the heads-up play could begin. Vezhenkov won a total of $86,183.