Hannes Jeschka avoided elimination at the final table of the $5,300 Luxon Pay Mediterranean Poker Party Main Event. The $5 million guaranteed tournament was one of several significant events on the calendar. 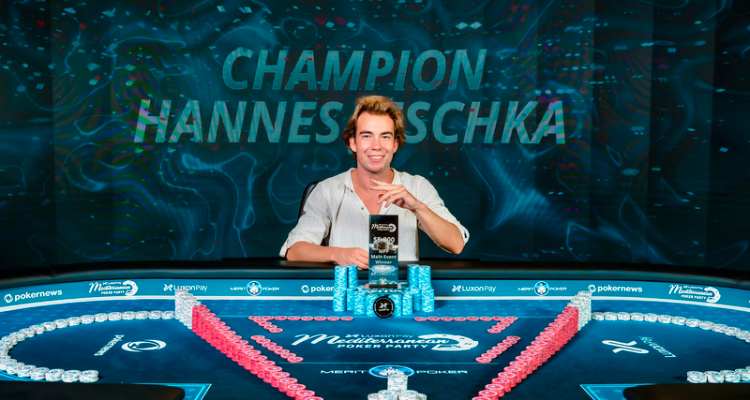 It was also the highlight at the Merit Crystal Cove Hotel and Casino in Cyprus. Leschka beat 1,032 entrants to earn the championship trophy and a prize of $542,000.

The purse was the biggest cash of Jeschka’s career, with his previous best finish at the 2021 $600 Wynn Summer Classic event, where he took home $44,340.

After his big win, Jeschka said, “This is just amazing. This is my biggest final table. It’s my biggest win ever. And it’s a prestigious tournament. Just amazing. It’s just incredible. I don’t really know how to feel. I’m really looking forward to taking the winner’s picture with my friends.”

Jeschka has had several deep runs throughout his career and has been waiting for more than two years for his next win.

His last victory was at the Winter Scandinavian Open Poker Championship in January 2020 in Rozvadov, where he claimed the top prize of $12,414. His best finish in 2022 was an eighth-place showing at the Merit Poker Western in January in Kyrenia, Cyprus.

Although these were Jeschka’s first POY points earned this year, his 1,920 POY points were huge as the event’s winner and were enough to move him up to 102nd in the Player of the Year standings.

Jeschka took the chip lead with 21 players remaining on the final day of the Main Event. However, by the time the final table came around, he had fallen to the middle of the pack and started fifth among the nine players at the final table.

Runner-up Arsenii Karmatchkii was the leader as play began and took out the first casualty, Riccardo Saraniero, whose pocket tens ran into his kings. Gabriel Akiki would finish eighth after being eliminated by Nuri Hadioglu, who was holding pocket kings versus his ace-ten.

Jeschka got lucky when he went all in with a pair of sixes against Koray Korkmaz, who held ace-king. He was down to about 12 big blinds and survived, doubling up as the big pots seemed rare at this stage.