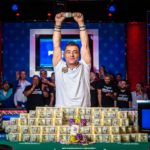 Out of the second-largest pool for the tournament, Hossein Ensan was the bracelet winner out of the 8,568 field of hopefuls. He went home with the top prize of $10 million and become the 50th WSOP champion.

This German player of 55 managed to hold off the runner up Dario Sammartino who finished in second and took home $6 million. Over a tense 8 hours of heads-up action which happened over one hundred hands and Day 10 of the tournament.

During the very final hand that he held was a king’s pair and Sammartino then went all in while holding a straight draw and a flush draw. Ensan’s hand came out on top and he became the 2019 champion, ready to have his name etched into the history of poker.

Being one of three champions of this event to win $10 million and up as the top prize. With the other champions winning $12 million (Jamie Gold) in 2005 and $10 million (Martin Jacobsen) in 2014. Ensan’s win was made even more historic due to the pool of hopeful players being the second highest ever in the championship.

Ensan is the second oldest winner to take home the bracelet at the age of 55, behind the 1999 champion Noel Furlong who was the age of 61 at the time of his event. Chip leader during Day 8 and Day 9, Ensan went into the finals strong. By the time he sat at the final table, his stack had grown from $34.5 million to a staggering $177 million. These 10 days were thrilling to watch as unexpected twists and turns occurred during this turbulent game.

The nail-biting suspense had the audience at the edges of their seats and then on their feet when Ensan was declared the champion.

How Much Money Will Ensan Actually Take Home?

Regarding the winnings that Ensan pocketed, it is yet to be seen if he’ll be able to keep the entirety of the amount ($10 million) or if it will be subject to a tax deduction. Since the players that took place in the tournament have come from a manner of different nations, any winnings won during the tournament will be taxed depending on the player’s nationality and that country’s tax regulations.

When it comes to Ensan, the question regarding whether he’ll be taxed or not lies in his status as a poker player. According to Germany’s tax regulations, amateur players’ winnings will not be subject to tax and professional players’ will.

Ensan has always referred to himself as an amateur, however, whether that is a modest statement or an actual categorization.

The German Regulatory Body has the Final Decision

Either way, the German regulatory body will be the deciders. The total tax that the top nine players (including Ensan’s if he turns out to be subjected to tax) will be nearly $12 million which is higher than the top prize.

The latest WSOP champion was thrilled to hear the news and so were his fans, cheering his name over and over again loudly as the crowd was filled with pride. The thrilling game was one to beat and many fan favorites didn’t make it. One thing is for certain: Ensan earned his new-found title as the 2019 Main Event winner.