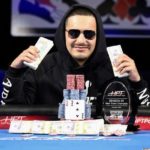 Another tournament that is a part of the Heartland Poker Tour wrapped up on Monday night with a $1,100 Main Event. In fact, the Main Event took three days to end, and Eric Salazar ended up taking the top prize, which was $98,476. Moreover, he managed to win a package for a $3,500 HPT Championship.

Salazar is not new to poker. In fact, he has been actively playing all over the country, managing to make half a million dollars in poker earnings. The majority of his prize money was actually collected during this year, as he has played some really good tournaments and had an outstanding result in them.

The HPT Daytona Beach Main Event was one of the best events he played, where he successfully managed to beat the field of 445 entries.

The poker player from Asheboro, NC, started the last day of the event fifth in chips but quickly managed to gain control of the table and became the most dominant player.

What was very noticeable about him was that he was having way too much fun, bringing a lot of positive energy to the table. Salazar stated that he was usually like that when he was not on his phone. However, he added that he was on his phone, basically always, which keeps him distracted.

However, fun itself was not the most important thing that Salazar had during the final day. It was confidence. It seems that one is connected to the other, as Salazar admitted that he had had a very good day that day.

He stated that he woke up that morning knowing that he was going to do well at the tournament. Moreover, Salazar admitted that sometimes he liked to “go for it” when it comes to his style of play, which could turn against him from time to time.

Only two months before this victory, Salazar had another great success, winning the HPT Main Event in Chicago, where he managed to win a total of $74,456.

A total of nine players created the final table, and the first one to hit the rail was Miguel Hernandez, who won $9,591. He was soon followed by Arthur Boatman, who ended up eighth and won $11,346.

The next one in line was Martin Borras, who ended up fourth for $28,044, and the last player to hit the rail before heads-up play was Ronnie Dowdy, who managed to win $40,460.

The last two players in the game were Michael Rosenberg and Salazar. Salazar was leading in chips when heads-up started, but Rosenberg managed to take an early lead soon after that. However, he did not last very long, as Salazar was on fire that evening.