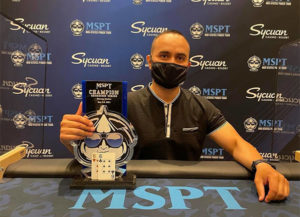 The first Mid-States Poker Tour Showdown Series at Sycuan Casino in San Diego wrapped up recently with the $1,100 Main Event. A total of 676 entries were recorded across three starting flights, and the final prize pool was $654,220.

After the entire weekend of intense real money poker action, Alejandro Jauregui managed to top the event. Jauregui is a Bay 101 poker dealer who called in sick to take part in the tournament and managed to win the main prize of $140,665.

The Salinas, Calif., resident has been into poker for most of his life. Still, before the MSPT Main Event, he didn’t record many big wins. In fact, he only has two recorded cashes from poker tournaments on his official Hendon Mob page.

Both of them combined was $18,090, meaning that was his official lifetime earnings figure. However, he has managed to break a personal record far and away.

He just fired one bullet and managed to win the $1,100 Main Event.

On Day 2, a total of 80 players returned, and the top 72 players got paid from the prize pool. Some of the players who failed to make it to the money list were Satoshi Tanaka and Joe Zana. The bubble bay was Terence Reid.

Some of the players who failed to make it to the final table but ended up reaching the money list were Greg Raymer, Alex Greenblatt, Kyna England, Ken Baime, Sandeep Pulusani, Trung Le, and Adam Friedman.

There were eight players who made it to the final table, and the first one to hit the rail was Haiau Han, who managed to earn $11,122 and earn 900 POY points for his effort. He was followed by Britton Sheibe, who ended up winning $15,701 and 1,000 POY points.

Jason Fitzpatrick ended in fourth place. His prize was $40,562, and he received 1,300 POY points. The last player to hit the rail in the final table before the heads-up was Eli Loewenthal, who received 1,400 POY points and a total of $58,880.

Jauregui’s final opponent was Jesse Jones. The two players dueled for a while to determine a winner, and it seems that a coin flip decided that in the end.

During the last hand, Jones had two overs against Jauregui’s pocket sixes. Jauregui managed to improve on the flop and get a set, whereas Jones was drawing dead on the turn and the river, eventually losing the final hand, having to settle for the second place.