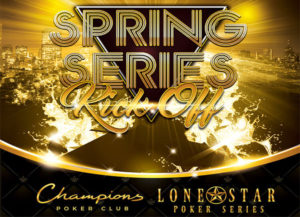 Texas will be home to the Main Event that will offer $1 million in guaranteed prizes for the first time in this country’s history. This event will be part of the Lone Star Poker Series (LSPS) which will take place at Houston’s Champions Poker Club.

The entire festival will feature a total of 19 events and will distribute more than $1.5 million in guaranteed prizes to the most successful players. The main attraction will be the Inaugural Texas State $1 Million Guaranteed Main Event, and players who want to take part in it will have to pay the buy-in price of $1,300. The Main Event will start on April 27 and last until May 3. It will have five starting flights.

Kim Stone, one of the founders of the tour, stated that Champions Poker Club and Lone Star Poker Series would be the first ones to offer a guaranteed prize of $1 million in the main event. Several card rooms in Texas offered big-size pools, but none of them dared go as high as a million dollars.

The event will host some of the most popular poker players, including Darren Elias and Matt Berkey. Moreover, two World Series of Poker Main Event champions are planning to visit Texas and take part in the LSPS Main Event.

One of them is Chris Moneymaker, who won a WSOP Main Event back in 2004, and the other is Greg Raymer, who did the same thing one year after that. In other words, the event will be star-studded, but many casual players are expected to visit this event as well.

Apart from the Main Event, players will have an opportunity to participate in many other exciting events that are part of the Lone Star Poker Series which will take place in Champions Poker Club.

The first event which will open the festival will be a $400 buy-in Spring Series Kick-Off which offers $150K in guaranteed prizes.

Another one that’s worth mentioning is Event #11: PLO Championship. Players who want to take part in it will have to pay the buy-in price of $600 and will have an opportunity to win a share of the $30K of the guaranteed prize pool.

Event #18 is also one of the spotlight events and will require a $600 buy-in. It’s called Spring Series Saver and will award $25K to the best players.

Apart from these events, there will be plenty of mixed game tournaments, senior events, tag-team events, and more.

It is safe to say that the upcoming poker festival will be one of the biggest that took place in Texas, especially when it comes to the prize pool that is awarded via the Main Event. Therefore, if you happen to be in Texas and near the poker club, it is definitely worth checking out starting April 15, as you can expect some of the great poker action and many famous poker players.