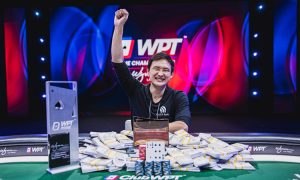 This latest victory for Song earns him 1,320 Player of the Year points and now puts him second in the 2022 Global Poker POY Race Score.

It was the biggest payday of Song’s career, with his previous highest payday coming at the WSOP $5,000 Six Man Event, where he finished second and took home $476,990.

The WSOP bracelet winner’s career earnings are now at more than $5.1 million.

The players reaching the final table was determined on December 13, but the six players didn’t resume play until the event was televised this Monday night.

At the start, Song and Lara Eisenberg were in the chip lead, with the latter having two more big blinds when play got underway. Giorgii Skhulukhiia was the first player eliminated about two hours in when Eisenberg beat his flush with aces full over twos, earning him $153,000.

Albert Nguyen finished fifth after his trips were beaten by the full house of Alon Messica to earn him $200,000 for a fifth-place finish.

Messica eventually took the chip lead until he came up against Young Eum and called his all-in with just king-high after having the nut flush draw on the river. Eum turned over his winning aces and fours to send Messica home in fourth place and a $265,000 purse.

Eisenberg had a three-to-one chip lead when heads-up play began. Still, Song quickly closed the deficit when he made four jacks against Eisenberg’s two-pair and got a call on a sizable bet on the river. On the final hand, Eisenberg had the top pair after the flop, with Song holding a gutshot straight draw.

The turn gave Song his straight, and he checked to Eisenberg, who bet $8,000,000. Song then raised to $22,000,000 before Eisenberg moved all in. Finally, Song called and only needed to avoid a queen or eight on the river to win the championship.

The river of the two spades completed the flop and secured the victory for Song. Eisenberg earned $481,500 for her second-place finish, which was her most significant cash to date. She has now earned more than $760,000 in her tournament career.