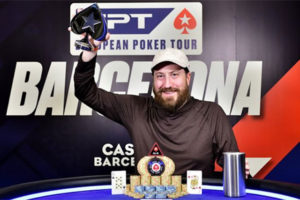 Steve O’Dwyer finished on a positive note after only cashing twice at the European Poker Tour Barcelona Festival last weekend. He won his third title in 2022 after taking the €25,000 High Roller II event, winning over the field of 52 players to take the €405,760 real money poker prize (around $404,300).

He also increased his lifetime earnings to $32,955,932, putting him at 14th on the all-time earnings list. The win was his 31st live tournament victory and the 67th of his career.

Before this most recent win, O’Dwyer had two scores at the event and finished sixth in the €25,000 Single-Day High Roller I, taking home €117,260. Also, the day before the start of this tournament, he busted just outside the money in the €10,000 High Roller event.

Before coming to Barcelona, he previously won the Irish Open main event and the €3,300 side event at the Live Millions Europe festival. This was his fourth EPT win, with his biggest coming in 2013 after winning the EPT Monte Carlo Main Event and the top prize of €1,224,000.

O’Dwyer was the chip leader going into Day 2, as the field grew to 52 when 12 more players bought in before registration closed to increase the prize pool to €1,248,520.

Unfortunately, only seven players would cash in this event, with top pros such as four-time WSOP bracelet winner David Peters and all-time great Dan Smith making an early exit before the final table.

Erik Seidel finished in seventh place after he ran into the A-K held by Pablo Brito Silva with his A-J suited. The board ran out with nothing more than a nine-high, and Seidel was eliminated.

However, he took a prize of €65,550 for being the first player to fall in the money. O’Dwyer later took a big hit against Brito Silva, which knocked him down to 250,000 chips, but he recovered to take them back a short time later.

O’Dwyer would then eliminate Brito Silva in fifth place while taking back the chip lead from Sergio Aido. He then gave the lead up to Juan Pardo, who took down a huge pot when he doubled up with A-Q versus Q-10.

The ultimate winner doubled up again to take the lead and then sent Aido home in a coin flip to finish in fourth and take home €137,340. Bruno Volkmann would be the next to fall after O’Dwyer flopped two pairs with K-6 after the Brazilian went all-in with his A-J of diamonds. Volkmann would earn €181,040 for his third-place finish.

O’Dwyer and Pardo then went heads-up, with the eventual winner holding almost a 4-1 chip lead. After seeing the river on a board showing king-high, Pardo bet almost his whole stack except for 25,000 chips.

Then, after O’Dwyer called the bluff, Pardo mucked his cards without going to a showdown. The runner-up would double up once but couldn’t hold much longer and lost with J-6 versus O’Dwyer’s J-10 to finish second, winning €268,430 and increasing his career earnings to more than $5.2 million.