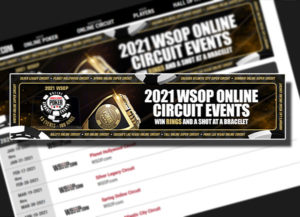 One of the most popular online poker tournaments at the moment is the World Series of Poker Super Circuit Online Series which started several days ago — on May 1 and will last until May 30. In other words, it will take place on identical dates as it did back in 2020. There will be a total of 18 ring events, but players will also have an opportunity to take part in cash games and win two more gold rings. This is the first time that a cash game comes with the final reward such as this one.

The entire series will feature the guaranteed prize pool of $100 million. This also includes all the side events that won’t feature gold rings as the main prize yet will offer lucrative cash prizes to the best players.

As for the 18 ring events, players will have an opportunity to grab a chunk of the $20 million in guaranteed prizes.

The most important event will definitely be the $525 Main Event that comes with $5 million guaranteed. Day 2 of the Main Event is scheduled for May 30, while the final table will be streamed on Tuesday after that.

There will be plenty of great events to take part in during the WSOP Super Circuit, and players from all around the globe will have an opportunity to participate and get one of the WSOP Circuit Rings. Buy-ins will start at $25, $52.50, and $77. There will also be three championship events which will cost $800 and $840 respectively to enter. However, players who don’t feel like giving that much money will have an opportunity to take part in one of the satellite events and earn their place in these tournaments that way.

When it comes to the format of these events, there will be five bounty tournaments, as well as two PLO events. Moreover, Deepstack players will also find several interesting events as well. One of the most anticipated tourneys will definitely be the $210 Beat the Pros, which will feature $500,000 in guarantees.

The opening event was the $100 Super Circuit Kick-Off ($1 million GTD). A player named “Bangshifu” from China managed to top the field, with a winnings total of $147,013 and becoming the first ring owner in this year’s WSOP Super Circuit Online Series.

Another popular event is Event #5: $315 BOUNTY GIANT NLHE, which comes with $500,000 in guarantees and will start on May 8. One day after that, players will have a chance to participate in BIG $25 that offers $1 million in GTD.

All in all, May will be an exciting month, as we’re going to see some great poker action.