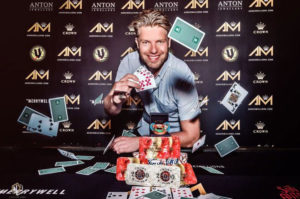 A professional poker player from the Netherlands, Jorry van Hoof had a series of very fortunate events in his life in the last couple of days. One of the most important days of his life actually happened a couple of days before winning an Aussie Millions event.

Van Hoof got engaged to Sophie, who is now officially his fiancée. Therefore, he was feeling lucky after that, and was in the mood to play some poker.

Only a couple of days after the engagement, he managed to win in the 2020 Aussie Millions A$25,000 Pot Limit Omaha Challenge.

Van Hoof won a total of A$467,280, which is roughly $322,400. That’s more than enough for one pretty luxurious and unforgettable wedding party.

His final opponent was Hun Lee, who played on the home court. Lee was, in fact, dominating the final table the entire time, especially because he started as a chip leader at the start of the day.

Nevertheless, van Hoof managed to turn things around and eventually win the event. The Dutchman won the second biggest live cash in his career.

Needless to say, van Hoof was pretty excited about this victory. He has had a series of successful events in the last couple of months that brought him to the top of the all-time money list in the Netherlands.

Nevertheless, he admitted to not being as excited about the victory as he was about the engagement.

Van Hoof’s best run was in 2014 WSOP Main Event when he managed to make it to the final table and ended up third. However, he did not play a lot of tournaments lately and decided to return to them when he and his fiancee sold the house in the Netherlands.

The two of them are living a nomad life at the moment, traveling the world and taking part in poker tournaments.

The Final Table — The Dutchman Had To Face Stiff Competition

The final table consisted of seven players, and all of them ended up with at least A$84,960. In fact, that’s the exact amount that Farid Jattin from Colombia won when he hit the rail in seventh place. The next one to go out was Fabian Brandes from Austria, who won A$99,120.

In fact, Ajez was the last player to hit the rail before Lee and van Hoof faced in the heads-up part of the competition.

Although Lee was the chip leader for most of the day, van Hoof entered the heads up with more chips, as he was the one to send Ajez off. Therefore, he had a significant advantage over Lee and used that to win in the event and win the biggest share of the prize pool.