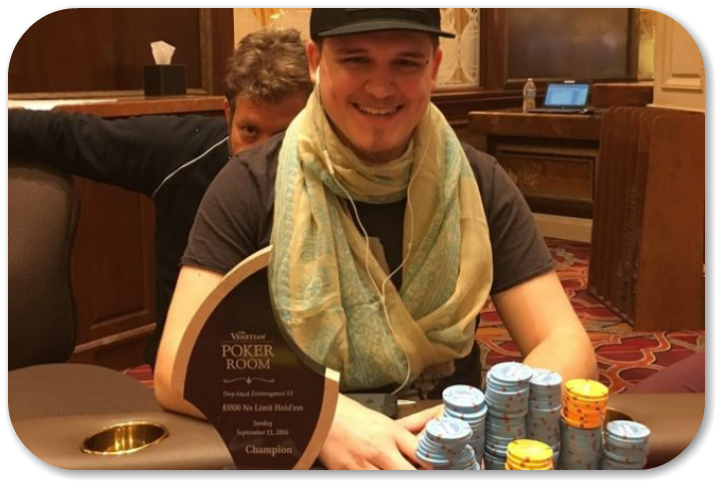 Live poker players recognize the Venetian Poker Room in Las Vegas as one of the most posh poker venues not just in Vegas, but anywhere in the world. The Venetian DeepStack Extravaganza poker series is considered one of the best live tournament series outside of World Series of Poker events.

On Friday September 9 the $1 Million Guaranteed Venetian DeepStack Extravaganza event got underway over three separate starting days. On Tuesday, it all ended in a four way chop, with Alex Rocha from the United States taking home most of the money for the biggest live cash of his career, bringing his total live earnings to more than $1.4 million.

The $3500 $1 Million GTD event had a huge $203,200 overlay. Late registrations were open up until 12pm of the third and final starting day of the event, and the tournament attracted 249 entrants.

It was the second big final table for Elezra in the span of a week. He recently finished runner up to Sean Yu in the WSOPC Planet Hollywood Main Event for his first ever WSOP Circuit cash, although he has already tasted success several times on the live tournament circuit, with three WSOP bracelets to his name.

In a crucial pot on Day 2, Rocha doubled through Ming Li, who was the chip leader at the time when this hand went down. Li’s pocket queens didn’t hold against Rocha’s ace-king. A king on the flop all but deciding that hand. Rocha had a chip lead heading into the final table of the hugely popular $1 Million GTD Venetian DeepStack Extravaganza and the rest is history.

The $3500 buy-in for this event is probably out of most player’s price ranges, but the 2016 DeepStack Extravaganza 3.5 poker series which is still running at The Venetian has had many smaller buy-in events some with re-buys available.