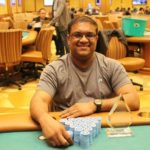 The last Big Stax XXXI 300 for this year wrapped up. It was the fourth tournament that took place in 2019, attracting a total of 1,413 entries. The player who ended up winning the tournament was Victor Ramdin, who made a four-way deal with the other three remaining players. The players chopped the final prize according to the size of their chips.

The final table of the Parx Big Stax XXXI 300 started very intensely as many players managed to double up their chips, making it a pretty even fight. The first elimination came when Rane Duong hit the rail. He had pocket sevens and went all-in, but he stumbled upon pocket queens from Lau and had to say goodbye to his opponents. He ended up 10th.

The next player to hit the rail was Jose Pereira, who also did not manage to win against Lau. He had an ace-seven and stumbled upon pocket 10s that Lau had in his hand. The remaining eight players played for a while and then went on a break.

After they returned, Steven Petitte was the next to exit the game. His ace-queen did not manage to match Nate Lindquist’s all-in raise and pocket nines. Nevertheless, Lindquist did not manage to hold on for much longer and followed Petitte out of the game.

He, once again, made an all-in bet on ace-queen, but he only stumbled upon the big slick that Ramdin had in his hand. He hoped to have a chance after the flop showed him a flush draw, but he bricked on both the turn and the river and ended up seventh.

Sixth place was reserved for Po Ying, who managed to earn a total of $12,283. He was soon followed by Dwayne Allen in fifth place. Allen earned $16,310 after he was topped by Ramdin. Allen moved all his chips to the middle of the table after the flop and had ace-six in his hand. However, Ramdin had an ace-eight.

Both of the players managed to have another ace on the flop. However, there was another eight in the flop, so Ramdin immediately gained an advantage with two pair. Allen needed running sixes on the turn and the river, but he wasn’t really lucky and had to leave the game. The rest happened as described — the four players agreed to split the prize according to the number of their chips and bring the event to a conclusion.