What Are Bots and How Do Platforms Deal With Them?

HoldemRealMoney.com > Poker > News > What Are Bots and How Do Platforms Deal With Them?
Post by Ryan Knuppel on April 21, 2020 - Tags: Online Poker, Poker Bots, Poker Sites 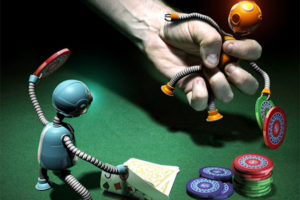 The rapid technology development brought about many good things, but a couple of bad ones came as well. One such example is available in the online poker industry in the form of bots.

Many leading poker platforms, such as PokerStars, have been doing a lot of work to eradicate bots and make the environment fair and square for all players. First of all, let’s define what bots really are.

A bot is, in the broadest sense, a robot. It’s a piece of software that does something instead of a human.

There’s a script that these bots follow and execute on a wide variety of platforms. Lately, bots have become quite sophisticated as they also have AI (artificial intelligence), meaning they could deduce patterns and make decisions that are sometimes not even scripted.

When it comes to poker, bots are basically pieces of software that do all the playing instead of players. What they do is analyze the current situation on the table and quickly calculate the best possible decision to do. In other words, they are always playing the decision that is mathematically the best one.

The other type of bots gives some control to the player. Although they calculate all the things, it’s up to the player to decide what to do.

Both types of bots are banned from the majority of online poker sites. Simply put, they are not fair and kill all the vibe that poker offers. That’s why online platforms always ban bots when they detect them. PokerStars, among others, is paying a lot of attention to this kind of issue.

How Do Online Poker Sites Deal With Bots?

PokerStars, just like many other poker sites, has a Game Integrity team that makes sure nobody is cheating. However, they also have a special team that’s only focused on combating bots and other artificial intelligence on their respective platforms.

The anti-bot teams usually consist of professionals from the industry who have a lot of experience playing poker but also developing poker platforms and other software. You can find data scientists, coders, and even professional players to be part of an anti-bot team.

What they usually do is look for patterns and anomalies in every played hand. Whenever there’s a suspicion that a bot might be playing instead of a player, the team then starts a thorough investigation that could actually turn to be quite tiresome if the bot is difficult to detect.

Nevertheless, they are detected almost every time. Although the team manages to detect 95% of the bots themselves, the other 5% is usually detected by players. Players usually inform the team about odd behavior, and that’s when the investigation starts.

Once they are detected, their funds are frozen and redistributed to the players who lost it by playing against the bot.

It’s often possible to connect the actual user who was using the bot with the bot itself. In that case, the user is banned for life from playing poker on that particular platform.