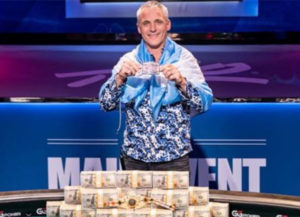 Sunday night was reserved for the big finale of the 2020 World Series of Poker Main Event, with Argentina’s Damian Salas winning the heads-up against the US champion Joseph Hebert. He won a total of $1 million, as well as a gold bracelet, the most important trophy in the world of poker. Most importantly, Damian got the bragging rights, having won the title of the WSOP Main Event champion.

The heads-up duel was nothing short of an epic, with chips going back and forth every once in a while. The two players played a total of 173 hands before the winner emerged. Nevertheless, Joseph Hebert is still the winner of the US part of the WSOP Main Even. Let’s take a quick overview of the format.

Due to Covid-19 restrictions, the standard WSOP couldn’t take place. Instead, the organizers decided to bring the entire tournament online but named it Online WSOP. Still, it wasn’t regarded as the official tournament, but just as it’s online variation.

In November, the WSOP officials decided to go through with an official WSOP Main Event. However, the biggest part of the tournament took place on the web. Only the players who reached the final table had an opportunity to play live poker.

The thing is — there were actually two separate WSOP Main Events taking place. One of them was focused on the US and the other was the World tournament. When both events reached their respective final tables, players went to popular poker rooms to face each other.

For world players, that room was King’s Resort in Rozvadov, Czech Republic. For Americans, the place was Rio in Las Vegas.

The world part was won by Damian Salas, while Joseph Hebert topped the US Main Event. The two players were supposed to meet on December 30 to play a heads-up match and decide on the ultimate winner of the WSOP Main Event. However, Covid-19 restrictions stood in the way once again, so the two players had to wait a couple of days before Salas could enter the US.

The action started with Salas playing aggressively and taking a small lead, but Hebert got his things together and took the lead by 3:1 at hand #71. He was then determined to win and even got to 8:1 chip lead.

But Salas was a tough nut to crack and won the first all-in on hand #83. The two players continued their battle for the next two hours as the blind just got bigger and bigger.

In the end, the action came down to pure luck, and Salas had a slight advantage there, which he used to win the game.