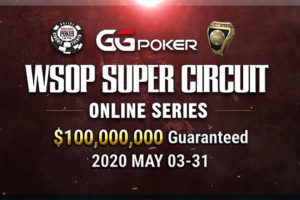 The World Series of Poker may be postponed, but the 2020 WSOP Online Super Circuit is alive and well, with many poker players actively competing on GGPoker for gold rings. The two events that gained a lot of attention recently were Event #12: Monster Stack and Event #13: COLOSSUS $2m GTD.

The WSOP Online Super Circuit will run until May 31, and it offers more than $100 million in guaranteed prizes, along with 18 ring events. On top of that, players can play many side events that also offer hefty prizes. GGPoker has been growing rapidly, especially after it partnered with two more poker superstars — Fedor Holz and Bertrand “ElKY” Grospellier.

The WSOP Online Super Circuit Event #12 was named Monster Stack, and it offered $500,000 in guaranteed prizes. It took a total of 15 hours from start to finish, and the player named “5Dinks4all” from Andorra managed to win the final prize, which was $126,949.

The Andorran did not have an easy task, as the event recorded a total of 4,846 entries. In other words, they had to battle their way through a massive field to reach the final part of the tournament.

Once there were only a couple of tables left, “5Dinks4all” started amassing their stack size, emerging at the top of the leaderboard over time.

The event action played out at a steady pace until there were 10 players left. At that point, it took hours before one of the players had to hit the rail to create the final table.

The main opponent to the Andorran player was “Piko1432” from India, who managed to win the consolation prize of $87,855. Other players who made it to the final table are “MrWheatToast,” “TheRealElysioum,” “Loazi,” “tonkatsu&wagyu,” “BigMac_3,73$,” “GorillaWarfare,” and “sinqularis.”

Event #13 took two days to wrap up, and a player named “WhiteChick” from Singapore emerged a winner, receiving a total of $499,366 as a prize. This event attracted even more players than the previous one, as the field consisted of 9,603 entries who took part in several Day 1s.

On Day 2, the field was narrowed down to 1,430 players, but it was the Singaporean who snatched the lion’s share of the pool.

This was the 13th ring event that was part of the World Series of Poker Online Super Circuit, meaning there are still five more to go, and many great poker players are expected to join the big finale.

These events will last through May 31, along with a plethora of interesting side events that won’t award a ring but will definitely award great cash prizes to the most successful players.