The PokerStars New Year Series is almost ending, as three No-Limit Hold’em Main Events were dealt with on January 15. 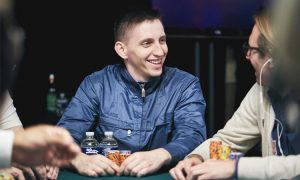 Some of the players who won money but missed a seat at the final table included Lex “L.Veldhuis” Veldhuis, Johannes “Greenstone25” Korsar, Lucio “WizardOffAz” Lima, “jokkee_apart” and Niklas “Lena900” Astedt.

Four among the top seven finalists made five-figure scores. “rObertOblancO” got busted first at the final table. He finished seventh with $4,634. gee-f#1 and Tom “Jabracada” Hall followed rObertOblancO in sixth and fifth place, respectively.

Action at the Table

Each of the nine finalists who reached the final table had an opportunity to win the top prize. But, WhatIfGod, AchoBogdanov, Allan Mello, and Daan Mulders exited the tournament early. Brunno Botteon and Renan Bruschi followed them in fifth and fourth place, respectively.

Heidegger left the table in the third position and set up heads-up action between Pedro Gusma and Gavin Cochrane. Even so, the duo paused playing for a while to make a deal.

The New Year Series is almost over. Still, 23 events whose buy-ins range between $2.20 and $2,100 will award their winners soon. Stay tuned for more.

In the meantime, sign up at our top recommended real money poker site and go after your own prize!