World Poker Tour (WPT) ambassador and world-renowned DJ Steve Aoki has been selected as part of the crew for the first civilian flight to orbit the moon. 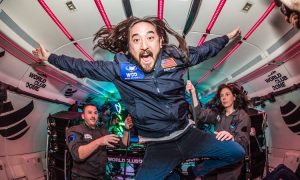 The week-long mission is scheduled to take place next year, with Aoki joining seven other artists that will fly to the moon on a rocket designed by SpaceX, the space exploration company owned by Elon Musk.

Japanese billionaire Yusaka Maezawa is financing the mission and selected Aoki as the first crewmember of the dearMoon project. This plan will send a group of eight creative people selected by Maezawa on the eight-day journey to and from the moon.

The Japanese billionaire purchased all eight seats in the rocket in 2018 and promised to give them to “as many talented individuals as possible.”

His goal is to provide each of them with a different perspective on the world and inspire them to develop unique creations based on their experiences during the trip.

Aoki is committed to the goal, as he’ll be providing some music for his crewmates during the trip and will be bringing his computer. So fans can expect the 45-year-old producer and DJ to create new music once he returns to Earth. He says it’s been his dream to go to the moon.

“As a young boy, I always wanted to go to space. It’s been a dream of mine for decades,” Aoki said in a YouTube video. “There is a fear there, but I can’t miss this opportunity. For me, my soul is begging for this; it needs this. So I will take on the risk, and I’m already committed.”

The WPT brought on Aoki as an ambassador in January of this year, and he’s been visible at many WPT events throughout the year. He most recently appeared in a meet-up game at the Wynn Las Vegas last week to kick off the WPT World Championship series.

Aoki has been playing poker since 2004 and sometimes hosted games at his Las Vegas home for the WPT, where players had a chance to win seats for the $15 million World Championship. Aoki and the other seven individuals slated for the lunar trip are expected to begin training early in 2023.

Maezawa and the rest of the crew will travel to the moon on the SpaceX Big Falcon Rocket. When he purchased the seats four years ago, he planned to invite a group of artists to travel with him.

The reusable rocket began development in 2012 and was first tested successfully in 2019. It’s the same rocket Elon Musk says will be used when he fulfills his dream of traveling to Mars, and this will be its initial orbital flight.

It will take approximately 60 hours each way to travel the 240,000 miles to the moon. The crew will then spend three days orbiting 125 miles above the surface before they fire up the rockets and make their return to Earth. Maezawa says he’s excited to see what “inspiring creations” the artists will develop while in space.